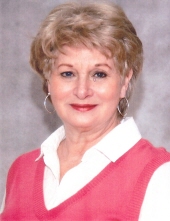 Funeral services for Mrs. Miles will be held Thursday, November 17, at 11:00 AM, in the chapel of Fletcher-Day Funeral Home. Dr. Derrick Keeter will officiate, and interment will follow in South View Cemetery. The family will receive friends from 10:00 AM until 11:00 AM on Thursday at Fletcher-Day Funeral Home. The family respectfully requests that friends wear bright and joyful colored clothing to celebrate JoAnn’s life.

Mrs. Miles was born October 30, 1942, in Thomaston, Georgia, a daughter of the late Floyd Felton Brooks and the late Josephine McKinley Brooks. She was a 1961 graduate of Yatesville High School. She was employed with the Upson County Water Department where she retired as the manager. She was of the Baptist Faith. “JoAnn” as she was affectionately known, was an avid gardener and rockhound. She enjoyed traveling with her husband, Terrell, through the western United States and going on cruises. She also loved cats.

In addition to her parents, she was preceded in death by her brother, Ray Brooks.

Those desiring may make memorial contributions to the Upson County Humane Society or the American Cancer Society.